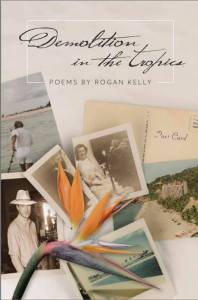 Demolition in the Tropics: poems by Rogan Kelly. Number 2 in Volume Four of our Editor’s Series.

Rogan Kelly is a poet and educator. He tends a small vegetable garden in New Jersey with his black and white Cavalier King Charles Spaniel, Hetty. He was a finalist for the 2018 Jane Underwood Poetry Prize. Raised in the shadow of the city, he can often be found in Brooklyn at readings and on low rooftops.

Silence at the Borderline Bar

A woman walks into the room with just-kissed lips, rendered bare. A man
walks in after her, lips painted, a secondhand shade of gothic cinnamon.
Those of us at the dank bar observe this clearly when they pass the well-lit
open doorway leading to the kitchen. And what alerts us at the bar to the
lipstick is the woman, striking, hair and clothes just askew, still fixing herself,
though lips dulled in contrast to the rest of her sheen. Preening clown
behind her, full of himself. They take up seats at the same large table,
illuminated by candle, but not next to each other. The coincidence of their
share-timed late arrival is met with light ribbing. Something about the next
round on them. The two shoot shameful glances at each other, made more
noticeable in how quickly they look away. Another woman in the group,
possibly his wife or girlfriend coils her body away from the table and into
shadow. Her chair pushed back, a kind of island, just out of reach of the
flickering candlelight while the man in lipstick leans forward, illuminated,
attempts to speak something funny, winning. The table and the bar and the
servers and bartender hold their breath. The busboy bussing stops. The
kitchen, alerted by the silence, but unsure of the happening, pauses. Every-
one focuses in; everyone sees. Two women lunge forward with napkins, but
it is the woman from shadow who puts cloth to mouth and part saving, part
killing, smothers him whole, rubs his face raw. He forgets what he was going
to say.

–Thank you to Hobo Camp Review for first publishing this poem.