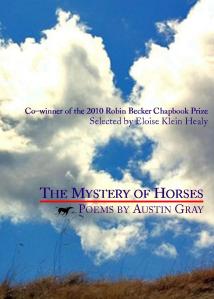 Having survived a New England boyhood, adolescence on a ranch in Montana, three graduate schools, a Roman Catholic monastery, and better living through chemistry, Austin Gray, a licensed professional counselor, recently retired from supervising addiction therapists at a hospital in Portland, Oregon. He live with his partner, the novelist, Henry Alley, in Eugene, Oregon.

Austin’s poems have appeared in Gertrude and Envoy; a short story in Willamette Week. He earned an MFA at the University of Montana, studying under Richard Hugo, Madeline DeFrees, and William Kittredge. In a past life, he sang professionally as a tenor, for which sin he repents.

Solstice wanes but in this photograph, like dead stars,
the sailors shine, half-naked, sharing a bed.
One smokes a cigarette–one in slacks, two
in jockeys, two in boxers. One frowns at a book.

The sleeper drowses on his belly, blind, as my eyes
stroke back and forth like a swimmer.
He glows on a deck in the afternoon light
of a lost Aegean. One half-turns his naked chest

against my sight like a hero’s shield deflects
attack. He leans back on an elbow to watch
the spinnaker’s snap. The reader’s tattoo emblazons
his flesh. I’m nothing to them in this London shop,

a universe, light years away. Close as tea to the tongue
that licks the frosting of summer’s glass,
but far apart as men on a submarine, they idle here
on a rumpled sea, but soon, as silk of a lamp’s mantle,

they’ll fail. The light’s too hot and lit too long. Listen.
Hear the air raid call their fathers heard but couldn’t
keep. I am the sulphur smell, the lit match.
This is the fight they wait, suppressing fire

upon these sheets–this flared moment
that shines lantern-like and guides my eyes
to heat, honing in, dive run, a zero.