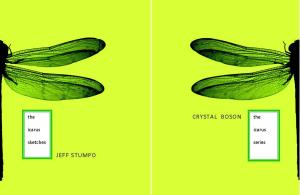 The Icarus Sketches. Number Three in the Seven Kitchens Press Editor’s Series, selected by Ron Mohring. Bound as a single tandem volume with Crystal Boson’s the icarus series, the Z-fold spine allows both books to be read back-to-back: there is no “top” or “bottom” half.

JeFF Stumpo is the author of two chapbooks: the multilingual poetic sequence El Oceano y La Serpiente / The Ocean and the Serpent (ZIM, 2004) and Riff Raff (Unicorn Press, 2007). He has also released an album of audio and video performance poetry, informal essays, and conversations titled Arts & Crafts. JeFF is a PhD candidate at Texas A&M University and lives with his wife, Kate, and their dogs, Stubby and Apple, in New Hampshire. Please visit his website for more information on his numerous poetic activities.

Ten years old and quick as light,
Icarus races downhill to victory
in the annual soapbox derby, the result
of late nights in his father’s workshop,
but not his work. He decides the next year
to dabble in physics, something about gravity,
and gives up science after winning
the Fair. He develops and discards
interest in woodworking, car repair,
loses patience when the lines he produces
for sophomore Art are not the perfect
proportions of an engineer, sputters
excuses for undone math assignments,
Ariadne’s panties, and the picture of a white
bull in his dresser drawer, wrecks
the car, steals from Minos, spends
a night in jail. Atop the school,
he spreads the wings his father made,
steps to the edge and leaps–
racing gravity and Daedalus downhill,
all on his own, quick as light,
and winning.