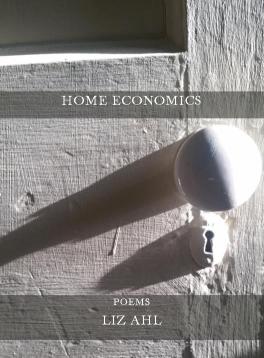 Liz Ahl is the author of three previous chapbooks: Talking About the Weather (Seven Kitchens Press, 2012), Luck (Pecan Grove Press, 2010), and A Thirst That’s Partly Mine, which won the 2008 Slapering Hol chapbook prize. Luck was the recipient of the 2012 New Hampshire Literary Awards “Reader’s Choice” award in poetry. Liz has been awarded residencies at Jentel, the Kimmel Harding Nelson Center for the Arts, the Vermont Studio Center, Playa, and the Writer’s Colony at Dairy Hollow. She lives in Holderness, New Hampshire and teaches writing at Plymouth State University.

Our galaxy is being pulled toward a specific region of space about 150
million light years away. We can’t see this area of space, and we don’t
really know what’s going on there, but we know it exists because we observe
its effects. Scientists have named it “the Great Attractor.”

In your ancient apartment–
one oddball portion of a rickety Victorian
subdivided into a ramshackle warren,
the pine board floor’s tilt was not subtle.
Not just that a dropped item would always roll
toward a certain load-bearing wall,
but that I always felt a little drunk there,
weaving my way to the tiny afterthought bathroom,
or even sitting at the tilted table.

It wasn’t that I was a visitor
who just hadn’t found her sea legs–
you’d also occasionally veer into an unplanned direction
on your way out the door. Sometimes we’d crash
into each other, laughing. We were still getting our feet
under us, those early days.

What great unseen force was drawing the boards,
the ancient nails, you, me, the spilled beans,
into its mysterious arms? We believed
most cosmology was speculative–and yet some force
seemed to lend a hand in the thing we were building together.

Even today, years together later, in our own house
where all the right angles hold true, we still find ourselves,
from time to time, off-kilter, still laugh nervously
about the future’s dark matter, still revere the power
of the promises we love one another too much to make.