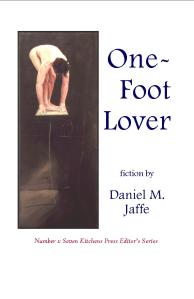 Cover art: “The Pillar” by Brian O’Connor; used by permission.

Daniel M Jaffe, a prize-winning fiction writer, is author of the novel, The Limits of Pleasure; compiler-editor of With Signs and Wonders: An International Anthology of Jewish Fabulist Fiction; and translator of Here Comes the Messiah!, a Russian novel by Dina Rubina. Dan’s short fiction, personal essays, and literary translations have appeared in dozens of anthologies and literary journals in the U.S. and abroad. Dan teaches creative writing in the UCLA Extension Writers’ Program.

“. . . Uniform shocked silence reverberated throughout the auditorium, followed by an as-if synchronized gasp of disbelief and petit horror when Peter, standing center stage, so small on that enormous stage, standing solidly on one normal foot and on another obviously prosthetic–lifted his blue tunic overhead and tossed it aside to reveal man in body-stocking sewn around an upper-calf stump. A stump encircled by leather harness attached to a full-leg prosthesis. No, not the semblance of a real leg and foot à la Flannery O’Connor’s good country Hulga’s, not a wooden leg attaching at the knee and ending in a brown shoe, but a long metal stick, leather-harnessed to Peter’s upper calf stump and ending in a suction-cup-like rubber foot. His leg and foot resembled a toilet plunger.”