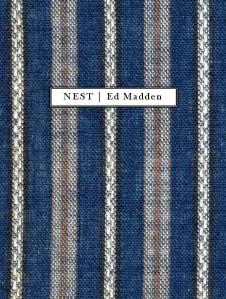 Ed Madden is the author of Signals, which won the 2007 South Carolina Poetry Book Prize. Madden is an associate professor of English and director of the undergraduate program in Women’s and Gender Studies at the University of South Carolina in Columbia. His poems have appeared in many journals and anthologies, including Best New Poets 2007, Best Gay Poetry 2008, The Book of Irish American Poetry from the Eighteenth Century to the Present (Notre Dame), and The Southern Poetry Anthology: South Carolina (Texas Review Press).

Lily, Jack’s yellow lab, leans across the futon to look
at me, the casita’s latest visitor, new neighbor for the week,

then she sighs–the way that dogs can resign themselves to something new–
thumps that thick semaphore of tail, and stretches, a back paw

against my leg as she sleeps–the way I fall asleep best,
my foot just touching Bert’s leg beneath the sheets. Meanwhile, the rest

of the world shudders on: sunlight spattering the shady lawn,
sirens pulsing on a nearby street, a cement rabbit pausing

at the back fence. If I speak of solace now, I don’t
mean comfort. At lunch today, Robert said his mother doesn’t

remember that she’d disowned him–the disease weeds the last few years
away. When he visits, she is almost loving, which she never