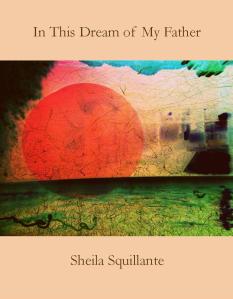 In This Dream of My Father: Poems by Sheila Squillante. Number 2.09 in the Seven Kitchens Press Editor’s Series.

Sheila Squillante is a poet and essayist living in Pittsburgh. She’s the author of the poetry chapbooks, A Woman Traces the Shoreline (dancing girl press, 2011) and Women Who Pawn Their Jewelry (Finishing Line Press, 2012). Her poems have appeared in print  and online venues such as Prairie Schooner, Quarterly West, Phoebe, Thrush Poetry Journal, The Bakery, and elsewhere. She is editor-in-chief of The Fourth River literary journal, and associate editor at PANK Magazine. She teaches in the MFA program at Chatham University.

My mother didn’t know cows
from pigs. On the fourteenth of February,
just a month after her twentieth
birthday, pregnant and on her honeymoon, they drove
“up the country” to my father’s family
cabin in the Poconos, far
enough from Yonkers that it might have been

the moon, passed farms and farms
and listened to her Simon and Garfunkel
gone off to look for America . . .
and I’m sure she felt she’d found
it when she said: pigs! pigs! look
at the pigs! He must have turned

and given her the same look he gave
my sister sixteen years later when she asked
who’s that? about the President
on television. Those are cows,
Eileen. She had no understanding

of that tone, then. Or the knowledge that
his brother, their best man, had emptied
her suitcase of all but the thinnest under-
things. How funny to send her with no clothes

to fend off Pennsylvania winter, my father burning
with obligation and no sense of humor
about cud-chewing pigs or snub-nosed cows–twenty-
odd years of this ahead of her: flimsy
pink peignoir and the brittle blue season.