Survivable World: winner of the 2003 Washington Prize and finalist for the Thom Gunn Award in Poetry. I am happy to autograph a copy for you. All copies sold through this link will help fund Seven Kitchens Press.

Review by Grady Harp for Amazon.com:

“Few poets have been able to convey the power of a love story as that that Ron Mohring shares in his gently gripping collection of poems SURVIVABLE WORLD. Though these poems are all connected to the loss of his lover David to AIDS, they refuse to enter the realm of morose, morbid, and synthetically manipulated sobbings. Instead what Mohring has created are captured memories and moments of a life shared as wholly as any two lovers in memory. His poems delineate the struggle with the slow decline of the exodus from the living world in a matter of fact style that allows the reader to observe the complex machinations of the daily routines that accompany disease – the thoughts from the caregiver role as well as the lover’s quiet anguish, watching the one person that has completed his life, slowly, and with both loss of dignity that is real, as well as the loving that makes the coping mechanisms beautiful.””Mohring gives us the memories born before the disease, the shock and ultimate management of reality, the quiet moments of death and goodbyes, and even the post mortem attempts to find life again, alone. In TO HAVE AND TO HOLD he ends his poem with these words: ‘…You’d gone before/ the funeral, before the doctor signed/ you dead, switched off the machine/ bullying your lungs. I would touch your skull – / frontal, parietal, occipital – and mourn what it/ contained, what couldn’t last, knowing/ this receptacle was all that would remain,/ gutted bowl and useless frame kiln-fired, fractured,/ packaged and delivered to my living hands.’

“This miraculous collection of poems will doubtless be a source of comfort to the survivors of this plague, but is should be read by everyone who faces the truths of mortality. There is a generous amount of love in SURVIVABLE WORLD, enough to encourage even the most fragile among us whose vision of death is threatening. In Ron Mohring’s hand life becomes even more treasured. Highly recommended.”

T-shirt and shorts. It is not
the man in the lime polo shirt who grabs at his clip-on

pager. It is not the tall man
in the white shirt carrying a Faulkner novel who eyes me frankly

but does not stop to say hello.
Not the small Brazilian man with the black elastic band

wrapped around his head,
the bright wire mouth guard gleaming. Not the loping man

Not the man in the leather shop
with heavy silver loops in his ear. Behind a row of video screens

announcing departures,
a pair of muscled legs. It is not the man attached.

It is neither of the mustached ones
in matching Pittsburgh T-shirts, nor the businessman

carrying his metal briefcase.
Not the beared man with his cap turned backward who smiles

as I stare, though for a moment
I think it could be him. The flight attendant with perfect hair,

the Greek man in the cobalt shirt
listening to his headphones, the Asian man in the yellow mesh

tank top, arms and chest fluid, solid:
none will deliver me. The Greek man bites his nails.

White bunches socks.
Mole above his lip. He is so beautiful, I can’t understand

why no one has found him.

After the funeral, after the families disperse,
after the first night alone, and the next,
the first year; after the first man you allow
to touch you, after the tenth, after you let
yourself use the word love with someone else,
after you decide to sell the house
but can’t get around to it, after you forget
the taste of his ashes and grit on your tongue
and it’s easier to say his name, read his diaries,
spend his money, sell his car, fuck
in his bed; after you’ve rolled the platitudes
into little pills and swallowed them all,
and life presents not cruelty but experience,
and his death has become just
another part of you you sometimes ignore,
after that, there is always
your own. 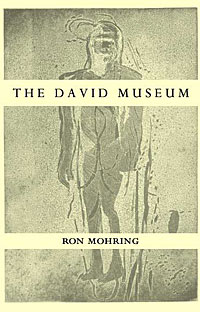 The David Museum: winner of the 2002 Diagram/ New Michigan Press Chapbook Award. Cover art by Roz Richards. Still available from New Michigan Press, or email me to get a signed copy for only $10 (these sales will go toward the support of Seven Kitchens Press).

It wasn’t into love I fell, but steadiness:
a kind of gravity that pulled
two opposites together: you predictable
and staid compared to my tangential mess.

It was your ordered way of doing things: so schooled
you were in How It Must Be Done
that I was more than happy to submit, be ruled,
relinquish my identity for one

that seemed–admittedly–better than mine, more fine,
a grander substitution.
I’d be your twin. You’d be my star. And, twinned,
I’d shine as well. No sooner said than done:

That was the simple plan, if ever once I held
a plan in–no, not mind, but heart:
I must have sensed you were my counterpart.
I held my breath and leapt, and tried to meld.

I knew you’d shape me, sculpt yourself a lover, start
from scratch and lend encouragement,
advice on how to dress, select a tie (an art
I never mastered), teach which forks were meant

to be used in proper order: not just etiquette,
but style. I’d grow more confident,
assured, insured, invested in, your love, your pet,
your pride, your partner realized, content.

I grew–not wings, but bark. I grew in rings. Intent
on keeping to the course you’d set,
I grew till I became your punishment,
the vine you’d tend whose fruit you couldn’t get

enough of.  Stamped and sealed, I was the document
you kept locked up because it hurt
to read the twisted plot. Unopened and unsent,
I knew you knew my every word by heart.

Had you stayed well,  the obvious ending clearly spelled
itself: we’d face the truth and part,
perhaps as friends but just as likely not. We’d start
again with men we’d find new ways to hold

accountable, yet close. Or else grow old alone,
which in its way (they say) is fine,
these days when by comparison our friends are gone.
(I can’t help thinking this should be your line.)

Had you stayed well, had we more time, if we’d begun
as friends, had passion never cooled–
had I been ill instead, would anyone
have read about me as they read of you? I’m ruled

by this untangling, can’t believe forgiveness
matters now. For me. My fool,
my awkward love, lost boy, you’ve been absolved of all.
I know that I deserve this emptiness.