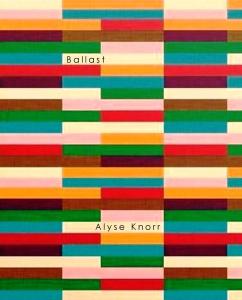 Ballast. Poems by Alyse Knorr, selected by Dan Vera and Ron Mohring as Number 11 in the Rane Arroyo Chapbook Series.

Alyse Knorr is an assistant professor of English at Regis University and, since 2017, co-editor of Switchback Books. She is the author of the poetry collections Mega-City Redux (Green Mountains Review 2017), Copper Mother (Switchback Books 2016), and Annotated Glass (Furniture Press Books 2013), as well as the non-fiction book Super Mario Bros. 3 (Boss Fight Books 2016) and two poetry chapbooks. Her work has appeared in Alaska Quarterly Review, Denver Quarterly, Columbia Poetry Review, The Greensboro Review, and ZYZZYVA, among others. She received her MFA from George Mason University, where she co-founded Gazing Grain Press.

A Mixing of Metaphors

Start with the legends: Icarus and the angels,
Da Vinci’s dragon-winged line sketch,

then the balloons and blimps crossing
the English Channel downwind, zeppelin

airships, gliders and free flight–control
without power and power without control–

until finally, the fixed wing’s lift, so much like love:
a fluid force enacted upon a body, upon a mind.

What I mean to say is: I’ve been ascending
since I met you; our marriage, a new type of height.

Start with the miracle of film: etching the record,
archiving the instant, preserving life as it is,

caught unaware, surprised by the camera
and its novelty–the novelty of actuality,

of originality, of the moment when two frames
merge, and then keep moving forward.