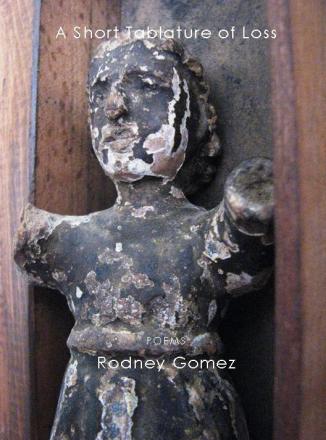 A Short Tablature of Loss. Poems by Rodney Gomez, selected by Ron Mohring and Eduardo C. Corral as Number Five in the Rane Arroyo Chapbook Series.

Rodney Gomez is the author of the chapbooks Mouth Filled with Night (Northwestern University Press, 2014), winner of the Drinking Gourd Chapbook Prize, and Spine, winner of the Gloria Anzaldúa Poetry Prize (Newfound, 2015). He is a member of the Macondo Writers’ Workshop and his poetry has appeared in Denver Quarterly, Barrow Street, Blackbird, Salt Hill, Drunken Boat, and RHINO, where it won the Editors’ Prize. Born and raised in Brownsville, Texas, he earned a BA from Yale and an MFA from the University of Texas – Pan American. He has served on the board of Migrant Health Promotion, a nonprofit organization dedicated to improving the health and well-being of migrants, immigrants, and related populations. He edits the accompanying anthology to El Retorno—an annual event honoring Gloria E. Anzaldúa held at the University of Texas-Pan American. He works as the transportation director of the University of Texas-Rio Grande Valley.

Lately I have been a gap.
Moth clouds follow me to bed.
I counted them: twenty, fifty, block, choke.

In the room where I used to sleep
a breath hangs low on the bed
and hoarsens the room.
No one knows where the air is
charged and released into the world,
but it thistles.

This is how breathing fills a house
with family: breathing to draw
the buzzing to its source
and breathing to lacquer a plugged maze.

How a house fully beamed and walled
is not a house, but a husk.
How a life in the span of a few breaths
becomes a clockless thing.