These captivating poems unfurl from associative narratives about banjos, yet the series far exceeds merely clever variations on a theme. Since no instrument can choose its player, music connects humanity at its most diverse, and these poems take full advantage of that simple truth. Through unusual settings, believable personification, and strong movement, these banjo poems invite us to consider the origins of the instrument and its history, the diversity of its players, the politics of race and religion, and a great deal more.  It’s a concert that’ll make you say, “Oh yeah” and “Wow.” 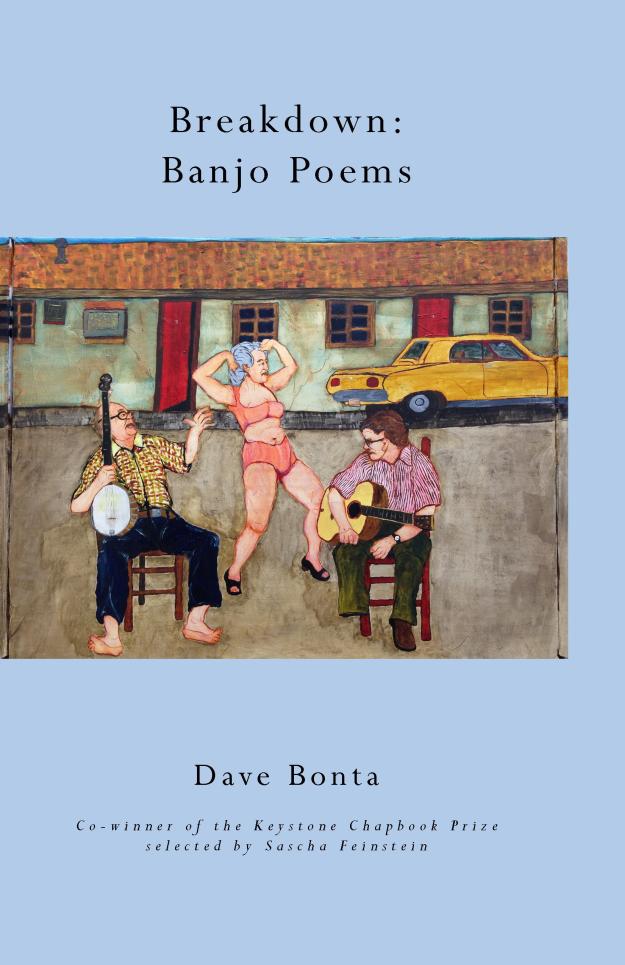 Cover painting: “What I Did Last Summer #11” by Steven Sherrill.

Dave Bonta is co-editor of Qarrtsiluni, an online literary magazine, and since 2003 has published a popular literary and nature blog, Via Negativa. Other online projects include Moving Poems, a growing anthology of online poetry videos, and The Morning Porch, a daily poetic microblog of observations from his front porch. In 2010, Phoenicia Publishing brought out Odes to Tools, a small book of 25 poems, and in 2011, Bonta was featured with eight poems in The Book of Ystwyth: Six poets on the art of Clive Hicks-Jenkins, from Carolina Wren Press (US) and Grey Mare Press (UK).

Bonta has lived in Plummer’s Hollow, Pennsylvania almost continuously since 1971, and grew up listening to his older brother playing the five-stringed banjo. An uncle and two cousins also play the instrument, though he himself does not.

Round peg in a round hole:
too cozy! It only needs to relax
the slightest bit & the whole
song fails, like a machine
with one slipped gear.

We hold our breaths then
for the single-string walk,
up up up up to pitch. Ah!
and the tune clatters back to life
with a whoop. (One hates to see
John Hardy get away.)

Rare as an heirloom,
particular as an orchid,
miraculous as spring water
flowing from a tap
& durable as a razor strop
is the banjo player’s ear.
It’s the only instrument
in the band that can’t
break down.