The good folks at Switchback have published a fresh review by Robbi Nester of Dave Bonta’s Breakdown: Banjo Poems. Thanks so much!

Dave Bonta’s chapbook, Breakdown: Banjo Poems, is co-winner of the 2011 Keystone Chapbook Prize and will be released September 21 as Number 9 in the series. Here’s a preview of the cover, featuring original art by Steven Sherrill: 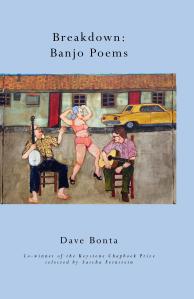 We truly appreciate everyone’s patience and good wishes as we relocated–and rebooted–the press. Listed below, in alphabetical order by title, are the ten finalists for the 2012 Keystone Chapbook Prize. We expect a final decision from guest judge Brent Goodman within the next few weeks. Meanwhile, congratulations to the finalists and our deepest thanks to everyone who submitted work or ordered copies of our Keystone titles. The Keystone Series will resume in 2014; meanwhile, the winning titles from 2011–Dave Bonta’s Breakdown: Banjo Poems and William Woolfitt’s The Salvager’s Arts–are due to be released by summer’s end.