We’re thrilled to announce the co-winners of the 2015 Rane Arroyo Chapbook Prize: “Aristotle’s Lantern” by Sierra Golden of Seattle, Washington and “A Short Tablature of Loss” by Rodney Gomez of Brownsville, Texas. Both manuscripts will be published this fall. Runners-up this year were MK Sukach, for “Hypothetically Speaking,” and Thomas Alan Holmes, for “Medievalist and I.” Our thanks to everyone who sent in manuscripts.

The next reading period for the Rane Arroyo Series will be November 1 – December 16, 2016.

At this time we’d also like to extend our deep gratitude to Eduardo Corral, who is concluding his term as co-editor of this series.

After a couple of delays–sorry!–the guidelines are up for the Rane Arroyo Chapbook Series. This series is open to all poets, so polish up that manuscript and send it in before the November 30 deadline. There’s no reading fee this year! Your humble readers are Eduardo C. Corral and Ron Mohring, and we’re so excited to continue this series.

Due to a significant number of queries regarding the changed deadline (changed from last year), we’re happy to extend the reading period for the annual Rane Arroyo Chapbook Prize: we will continue accepting submissions through October 31. Please note that work will be considered this year only from writers without previous book or chapbook publication. We use a blind-submission process; editors Ron Mohring and Eduardo C. Corral will read every manuscript received and are looking forward to seeing your work! Full guidelines here.

We’re very happy to announce the co-winners of the inaugural Rane Arroyo Chapbook Prize, selected by editors Ron Mohring and Eduardo C. Corral: Six Poems from the Codex Mojaodicus, by Steven Alvarez of Lexington, Kentucky, and No Innocent Eye, by Rhett Watts of Manchester Connecticut will be published in spring 2013. It was an absolute pleasure to read and discuss such a wonderful, diverse array of manuscripts. Our thanks to everyone who entered work and helped spread the word about this series. We truly could not do this without you.

We are now accepting submissions for the Rane Arroyo Chapbook Prize. This series is co-edited by Ron Mohring and Eduardo C. Corral, and we’re extraordinarily happy to honor Rane’s memory with a chapbook series that honors his life and work. Full guidelines are here. 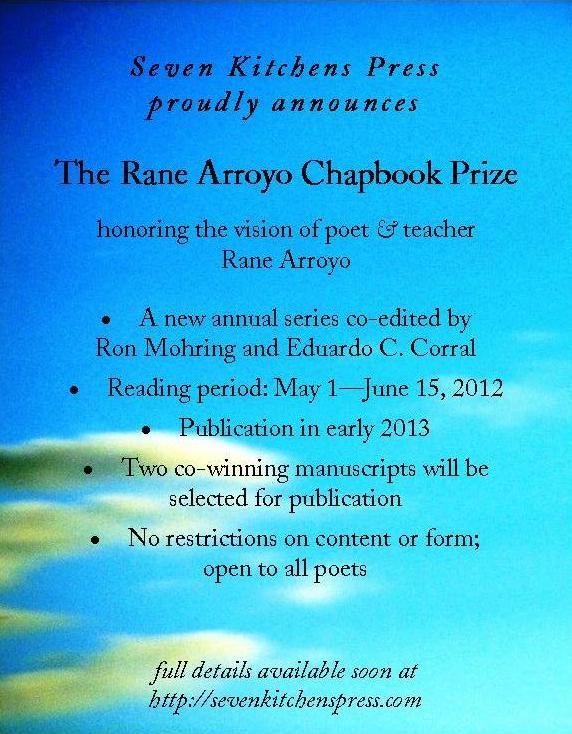